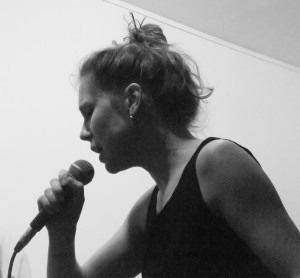 « My work is an exploration of voice as a vehicle for encounter and metamorphosis. During periods of immersion in specific contexts, I collect sound and visual materials from which I create performances, sound installations, videos and publications. My practice is transdisciplinary; situated within the field of contemporary art, it involves music, as well as theater or sound poetry, creating bridges between past and contemporary universes, both scholarly and vernacular. It is enriched through human encounters (my project Mémoire Palace, for example, was based off of encounters with the inhabitants of a town, Babel Babel with babies at a daycare center, Madame V. with a Fortune-teller…) or non-human encounters (birds from Lapland in Hybrid, artificial intelligence in E.V.E., the mineral world in Vestiges de Roncevaux…) and is based on theoretical texts (anthropology, sociology, psychoanalysis). Encounters and collaborations — with musicians, choreographers, circus performers, visual artists, graphic designers, researchers in the social sciences… — are central to my work process »