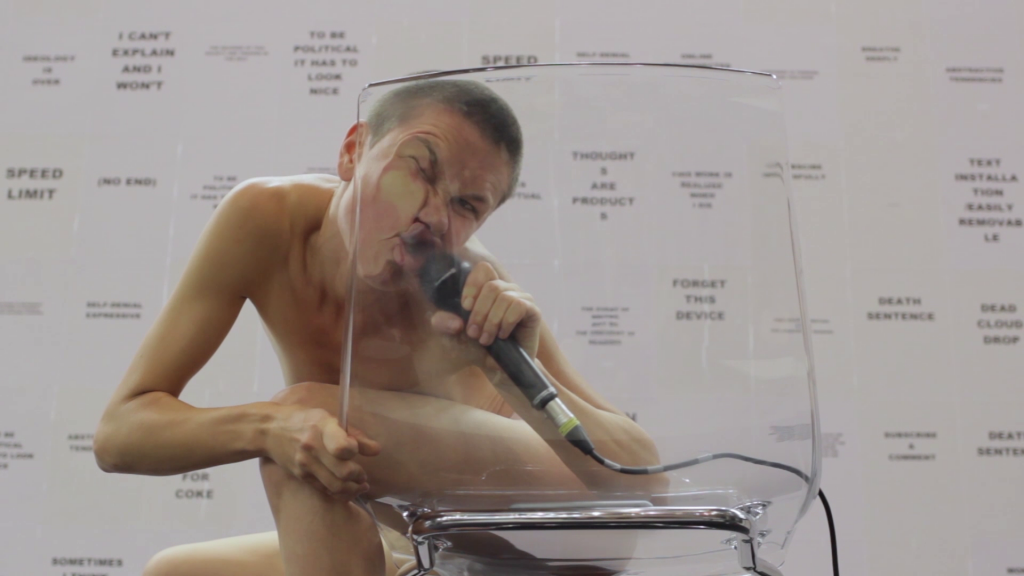 Violaine Lochu, Meat me by Barbara Polla in the art review Art Critique, 2019

No single work of art has touched me as deeply as Violaine Lochus‘s Meat me in the last two years. Performing alone, her body half naked, her soul incarnated by Bacon, she offered the public an essential, unique, and most performative experience. Sharing Bacon.

Violaine Lochu is recognized as a voice performer – but who knows yet the extraordinary power of her screams? Meat me starts with such a terrifying scream, the type of scream animals get out of their body ready to be “meated”. Meat me also and foremost “exhibits” the poignant and devastating transformations the artist is able to impose on her body. With a transparent chair as her sole crutch.

A few young women, during the performance, looked at each other, shook their head and left. “It was such an extraordinary performance that they left, what do you mean?”, the art historian Paul Ardenne asked me when I tried to explain to him what had happened. What happened is that the body of Violaine Lochu, a young and gorgeous female body, wasn’t beautiful anymore. On stage, it was sublime, it was terrifying. It was not sexualized, as Bacon’s bodies are neither female nor male bodies. It was a human body, as Bacon’s bodies are human bodies. It was an animal on stage, as Bacon’s bodies are animal bodies. Living bodies soon to be dead. Lochu was reckless enough to override her own female body, to forget about beauty and attractiveness and to become a painting by Bacon. What an homage. At this point, Bacon turned around in his grave, looked down to the open space of Pompidou where Lochu was performing, and, astonished, amazed, frightened, screamed to her: “Sister !”

Pain has no gender. Human beings in pain are human beings. Human bodies. Bodies. Flesh – meat.  Violaine Lochu also gave the perfect title to her performance: Meat me. Meat me, meet me, I am made of meat, I am made of scream, I am nude, I am mud, I am blood and shit, I am not myself anymore: I am all of you, I am suffering. I am Bacon.

She arrived on scene with naked breasts, she left the scene with the glory of telling viewers, once again, that the ephemerality of performance has the potential to engrave its images on us forever. Unless, too afraid to keep our eyes wide open to our suffering humanity, we shut them and left before the performance ended.