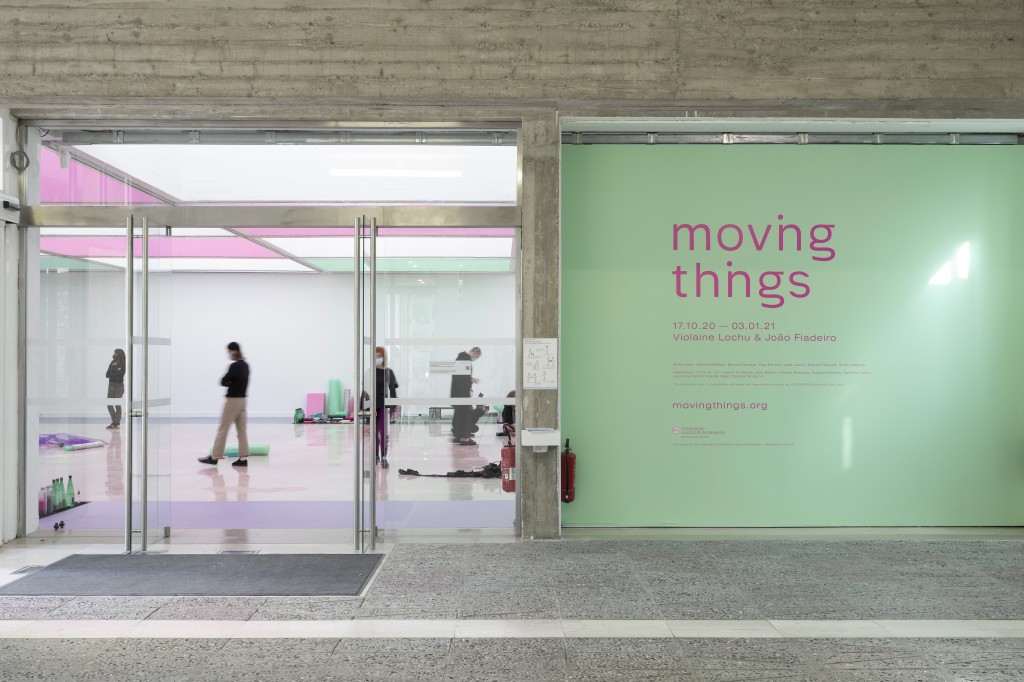 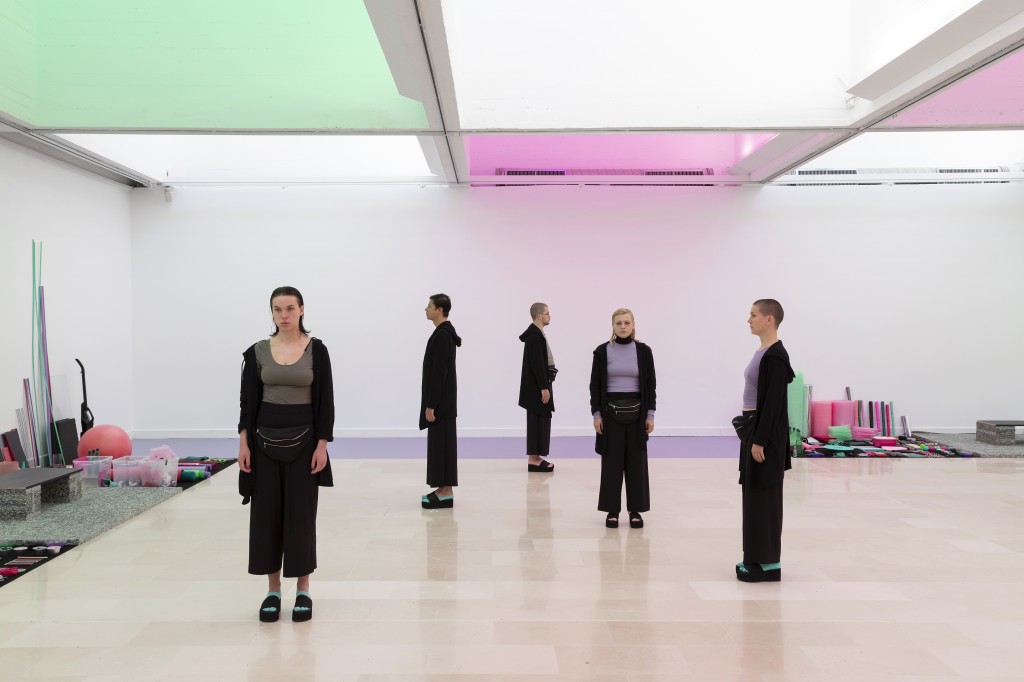 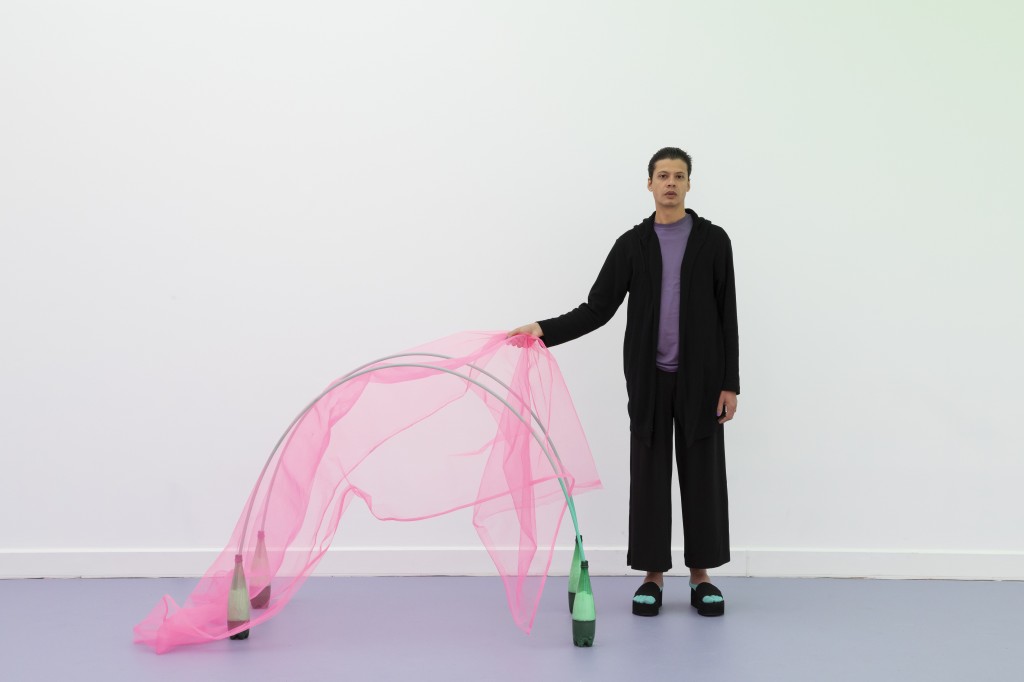 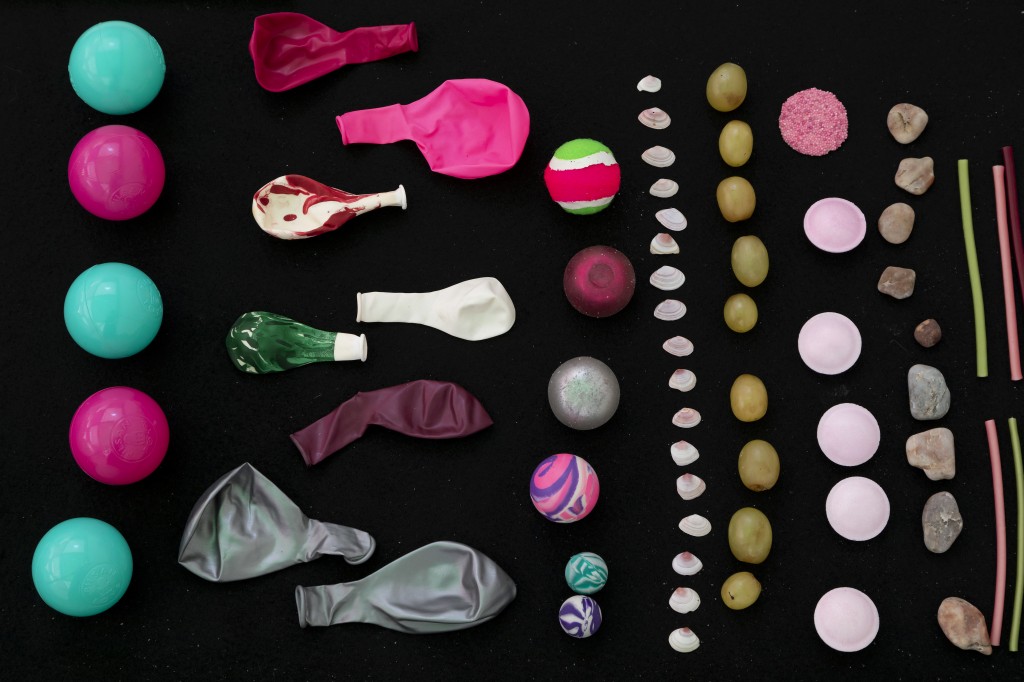 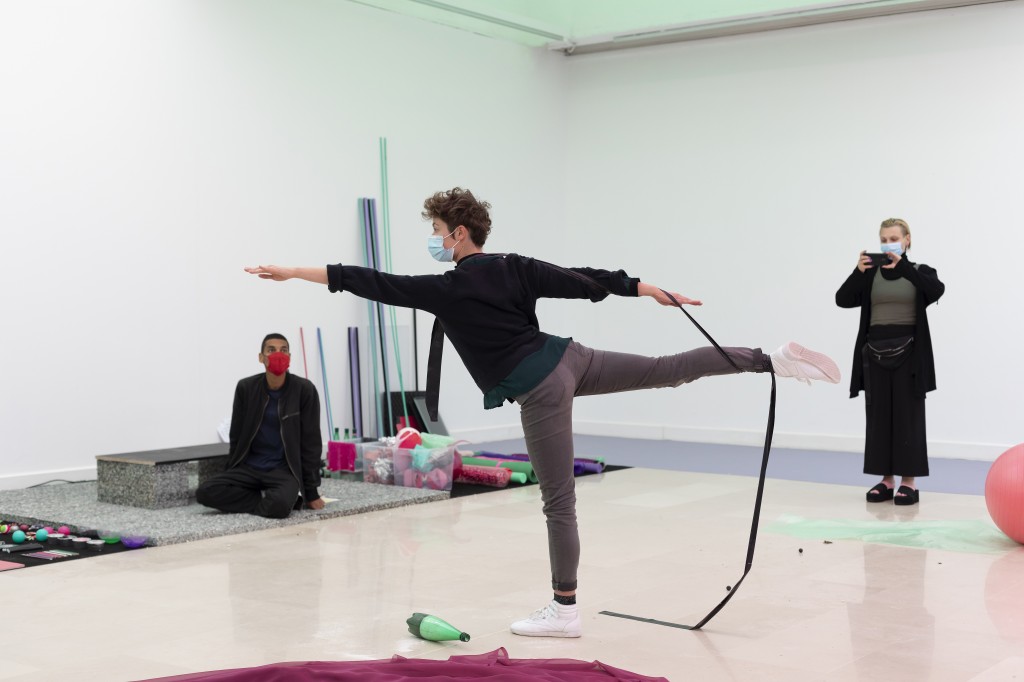 The exhibition moving things reunites Violaine Lochu, a French visual, sound and performance artist, and João Fiadeiro, a Portuguese dancer, choreographer and theoretician. The work group that initiated the project suggested they produce an exhibition «gradually indexed on encounters, including the physical environment, space, time and duration, the art center guides as well as the public, an exhibition conceived locally with as little transportation, production and red tape as possible – all of which tends to make the production of exhibitions more and more complex.»

Inspired by the studios at the Villa Arson but also by gaming tables and Japanese interiors, Violaine Lochu created an installation to be performed, a sort of playground with endless possibilities. It is made of raw materials, chosen for their potential for transformation (fabric, rubber bands, chemicals, eggs, gelatin, modeling clay, aluminum…) and will be activated by performers trained in a specific approach to improvisation 3 transmitted by Joao Fiadeiro according to their specifics (weight, height, matter, color) and their performative potential (sound, choreography, theatrics…).

All these items – folded and put away with a minimalist aesthetic against the walls of the art center’s Galerie Carrée – will be gradually unfolded over the entire space following a precise protocol: the visitor is invited by a guide-performer to answer an administrative looking questionnaire. The answers are coded, forming an “algorithm” which relates to a score listing various types of relations between body and object. The code, indirectly induced by the visitor’s answers, tells the performers which kind of actions to undertake. At the end of the day, the central space of the Galerie carrée is swept clean so that the exhibition can start afresh the next day. The rules of this game provide a setting for improvisation: the protocol was conceived in such a way that none of the actions are written or planned ahead, and that the performers must “compose in real time”.

For João Fiadeiro, composing “in real time” brings on a change of paradigm concerning the notion of time. Instead of using past experiences and future expectations as parameters, his goal is to favor a radical sensitivity towards the present moment. Time is no longer perceived as linear, it is experienced like a Möbius strip – where inside and outside, before and after become mixed up and confused – thus creating conditions for “seeing anew”, as if for the first time. Starting with the invisibility coefficient of bodies capable of adapting to any kind of convention (such as visiting an exhibition for instance), the performers will play with the boundaries between reality and fiction, what is true and what is false, absence and presence. The traces left by these contrary oscillations will contribute to the creation of the exhibition landscape and will be documented by the art center guides. Acting as archives for the exhibition, these documents will be accessible on this website www.movingthings.org, designed by web-designer Christophe Hamery, so that the exhibition will be permanently accessible on line, a sort of visible laboratory where one can glimpse at fragments, leftovers and traces of unfinished actions, found or forgotten objects… This opening onto a perpetually moving exhibition also transforms it into a reflection about the memory of a performance. How can it be documented? What status do the images have? Is a memory a work of art?

The workshops organized by both artists to train the performers to interact, to adapt to their environment, and to answer any kind of improvisation, in line with the annual research program Improvisation/Indetermination, will also teach the performers how not to act as interpreters but as independent participants. Rather than an aesthetic dimension, the project takes on an ethical dimension by analyzing the notions of listening, transmission, engagement, individual and collective responsibility. All of which are eminently political issues.