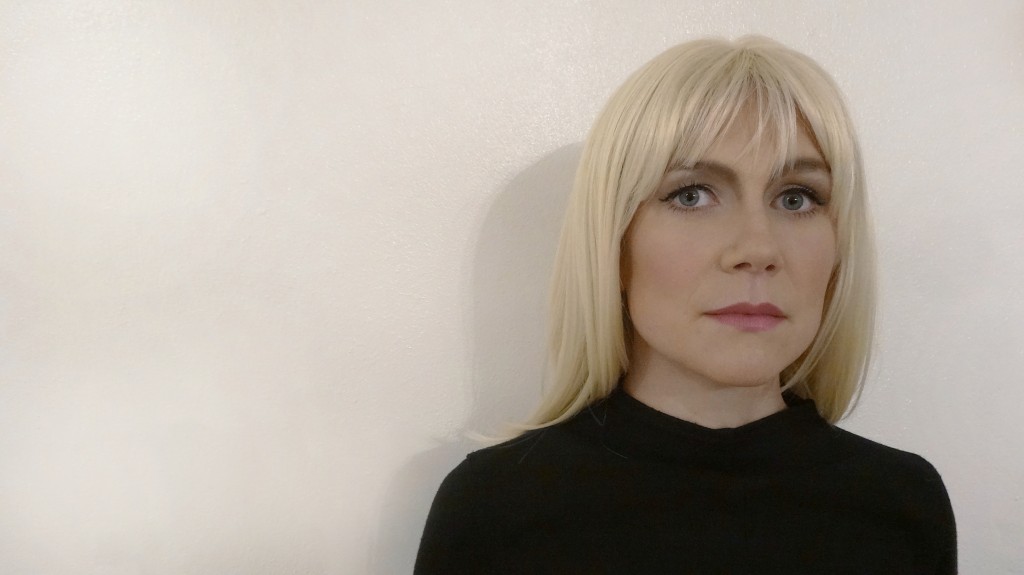 What belongs to us in language? Violaine Lochu, who participated in the Montrouge Salon in 2016, is a Transformative voice, between species and genres – human and animal, masculine and feminine – to become amazon, car, siren or cartomancer. During his performances, videos and radio plays, it fuses different languages, songs and cultures minority. After a residency at the Art Center Delme Synagogue, she is invited tonight, Friday, by Vanessa Desclaux and Émilie Renard at the Art Center The Noisy-Le-Sec Gallery.

How to explain that, in the field of art, animals are ofmore and more simply referred to as non-humans? In the wholejust published Animals, an excellent anthology of texts brought together by Filipa Ramos(responsible for the art-agenda portal), there is a need to considernew inter-species relations, in the wake of debates around a worldanthroprocentré. Contrary to the ideology of global communication,humans can not access the otherness of non-humans without changingthe very foundations of a human-animal differentiation and its presuppositionshierarchical. In the book cross Jacques Derrida, surprised naked by trainto be watched by her cat, Donna Haraway pondering a new Biopolitical Relationships From Dogs, Native American Perspectivismof the anthropologist Viveiros de Castro or the chimpanzee raised in the laboratoryTristan Garcia (in Memories of the Jungle, 2010) trying to simulate amemory of the wild world.

This questioning of the nature / culture opposition has been integrated organic way by Violaine Lochu to her vocal performances: the voice is in her a transforming weapon of the animality of the body, assimilating a a multitude of identities, idioms and functions of language. In Aoïde, she seeks to reinvent the siren song, these women-fish whose call will become with the artist a polymorphous evocation of Greek mourners, singing whales and the whistled language of Gomera. « I’m looking for an outside, a to become a bird of language, she adds. Mimetic animals interest me, be it their ability to reproduce a sound (the mainates, true chameleons voice) or movement (flocks of starlings, packs of wolves,schools of fish) that I translate by voice. Moreover, in Animal Mimesis, I explored this collective dimension of language because itslearning is done by mimicry while giving us the impression of acquiringa subjectivity « . Violaine Lochu will then turn to oral culturesand popular songs, in dialogue with anthropologists, to compose multi-language scores, out of all identity dimension. « If we continue tospeak the same language we will reproducethe same story « , expressed in 1976 the feminist linguist Luce Irigaray, calling for imagine a language outside the model patriarchal. « I lived a few months in the Salento in Italy to introduce me to the songs of women southern Italy, associated with tarantism (aso-called bite-contracted diseasespider, inducing a state of trance that allowed one to express oneself in a repressive environment), evokes the artist. To reinvent the language of the people Amazons, I became interested in the Japanese grammatical structure (withoutgenre) and to Ukrainian and Inuit songs, applying tactile trajectories,circulars. Sometimes she literally ruins a text (that of the Song of Roland) by a borrowed vocal erosion effectto geology and learned in collaboration with an archaeologist. For another performance, evoking the distorted transformation of oral culture,the origin of the myths, Violaine Lochu deploys a nursery rhyme, crossing the diversity of accentswho makes the tongue a living tissue. « I am inhabited by all these voices. The language does not belong to us, the author disappears, we are the conduit of a community, « she says. Seeking to establishan oral memory of Montreuil, she asked to the inhabitants to tell him something they know by heart, replaying all these voices memorized in turn (using the ars memoriae,an ancient mnemonic means that connects thespeech at places).Violaine Lochu seems yet less close to a documentary approach than of a renewed passion of his generation for the contemporary poetry, looking for a future hybrid, between species and genera, composed of languages minority. It is therefore not surprising to see her dressed up as a psychic for a divinatory performance where she becomes a sensor, a sort of shaman robotics, recalling that in his work (and among mediums) the dimension Performative language is more meaningful than the message. « I know that imitating other voices I risk losing mine, that’s it, but I do not want to to encumber me, I would have kept only my body and voices, « she concludes. 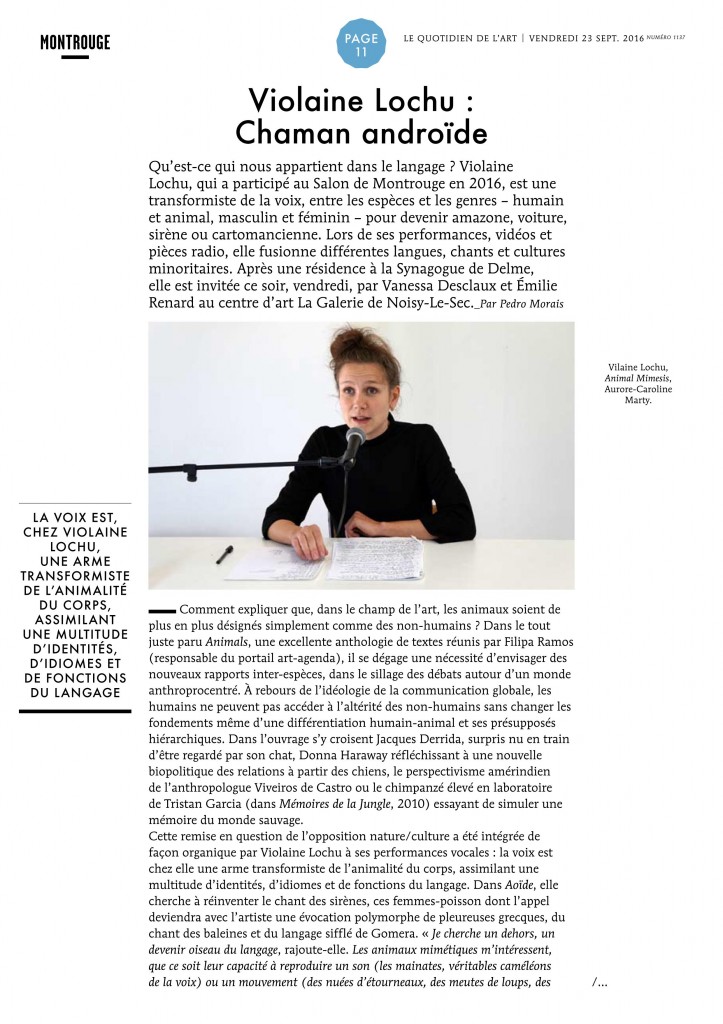